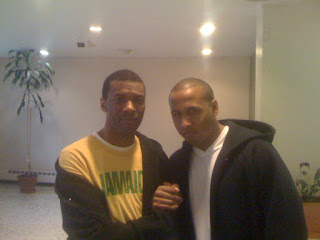 On the 27th of May I went to NY all courtesy of my cousin @Mr ArchersNYC who I affectionately refer to as Phil. I had a gig when I arrived with Deadly Dragon Sound at Happy Ending in the Lower East Side. The event was an intimate reggae affair. Selectors Scratch Famous, Queen Majesty, Mr. K, and J Debeck represented magnificantly. I wasn't too bad either. Salute.
I planned my trip in a way that I wouldn't be burnt out an that  wouldn't miss certain folks. Only things I was scheduled for was the gig with Deadly Dragon Thursday, live broadcast with the Beatminerz on Saturday and their birthday party at club Sutra on Sunday. Since I didn't have anything pressing on Friday, I thought I would just chill and got to Cambria and see my old school crew and the houses I grew up in. I hadn't been out there in 20 odd years and its the illest feeling walkin down the block where you learned to ride a bike, used to trick a treat on. It was a good feeling. Went to my old PS and IS which they have changed to MS.
The Ave hasn't changed. Its still hustly. Had a gotta slice of pizza and my favorite soda GUINNESS. 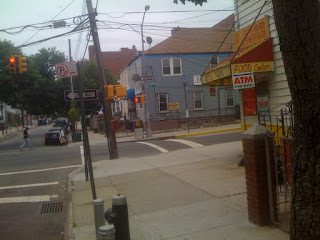 Walking down the Ave seeing races I haven't seen from when reminded how diverse the environment I come from is and is probably why I'm so crazy. Also I think I saw four fights in a day and 3 car accidents. One cat screamed on a girl saying "I'm supposed to be scared of you because you have an ugly face?!" I LOVE NY! New York, Jamaica and England are the only places I know where you can go to the store and buy one beer or up to five out of the six pack if you wanted to. Can't do that in TX . Well not in Dallas (maybe Houston). Still.
Posted by King CoknI at 8:27 PM 1 comment: