DJ Till Me Dead 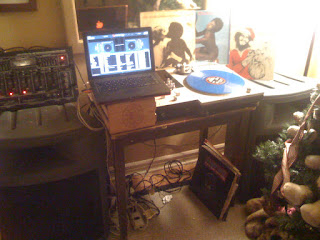 Oh! What a way me love do wah me do B. The man called Kid Capri said from when that DJs are forever sought after because people will always want to hear music or enjoy some new sounds. Even though there are a billion DJs on the planet Earth, still feel like I am the only one like a me.
Right ya now I wanna big up youth like DJ Nature, Sober, and Select who worthly hold the fort down in Dallas. As a longtime, I can appreciate what them man deh do and how much work they commit to making the party live.

Labor night they hosted GZA at the Loft and put me on to MC in the open while Sober spun the sickest of classics. I had on my old ass Wu shirt that I got from Bigga B back in '94 and drank 2 juice, 1 bill and a water and was ready fi tell dem bludKlot dis ...
Me just laugh and shot dem. Promoting a good time and no loc up ting. Got all 8 of the girls on the floor and the rest of the niggiz dem start to get in line. When doggie dropped the Black Moon and the Mobb Deep and the Das plus the DITC, I just had to get sick widdy and start salute all area and region.

MCing down here is a little different/ I don't know if it's because I didn't grow up here or they just don't respond to what cats in NY, LA, UK, JA, TOK, FLA respond to. Like they don't seem to care about there hood or that they in TX that much, but HIGH SCHOOLS and TEAMS? Forgeddahboudditt! Killah Priest got on stage and the first thing he asked was there any Cowboy fans to a tumultuous "Hell Yeah!" I got to remember that next joint.

Recently I got an opportunity to do a weekly at a sportsbar playing country, eighties, rock, and top 40. The music was no problem, but they said I wasn't on the mic enough so I lost the gig. Could you imagine they wanted more mic? The thing is I'm not a sportscaster, I'm and MC. I move crowd, control mic, master the ceremony. Basically, I perform best at parties. This sportsbar thing was dead stock to me. Eventhough it paid well and all that, I couldn't just dry hump the dance to get it poppin to their liking, so let that go.
Speaking of let go, me and my man Luminba was doing a thing called Let Go at theSouth Dallas Cultural Center.
We were given the opportnity to play whatever we wanted because they liked what we played. The only thng
was, nobody promoted it. Still, I loved it. I just love spinning. It's my oxygen. Candidly, I don't like to go anywhere
unless I'm given an opportunity to DJ. Tonight there's a Christmas Party at my mans gate and I'm trying to figure how can I DI it.
I'm baggin up my mac, Serato and xtl HD oh and a mixer with all the cables I need incase I'll be allowed to draw selection for my homie.
Posted by King CoknI at 8:46 PM No comments: