ˈkəvənənt/
noun
a·li·en
ˈālēən/
adjective
Ridley Scott returns to the universe he created in ALIEN with ALIEN: COVENANT, the second chapter in a prequel trilogy that began with PROMETHEUS -- and connects directly to Scott’s 1979 seminal work of science fiction. Bound for a remote planet on the far side of the galaxy, the crew of the colony ship Covenant discovers what they think is an uncharted paradise, but is actually a dark, dangerous world -- whose sole inhabitant is the "synthetic" David (Michael Fassbender), survivor of the doomed Prometheus expedition.

That being said, I'd to explore the expectations and the disappointments I had with this movie. My reviews are hasty because I currently see movies when I can or afford as opposed to many established critics that are forwarded advanced releases to screen. No worries because I got to see it today in the last week of the merrily merrily month of May. I was taken by surprise ... Sorry. Let me contend with my apparent attention deficiency and get on down with my bad self.
Went to see Alien: Covenant with my wife and my neph both of whom I like seeing movies with from time to time. My nephew (@negroMagicTV) especially because we build and destroy. He a young boy and I'm a old head so our world views clash, but we still find enlightenment from each other somehow. The Wiz, my wife!, tends to come off unequipped with the convos that me and Nephew have but don't let her fool you. She knows what's up she just pretty over it which says a lot about what I took away from this film.
My early ALIEN experience took place in a bookstore. I didn't know Ridley Scott from Scott la Rock, but I heard about the movie Alien as it was released when I was quite young in 1979. Making moves on my roller skates in Manhattan rolling around Wall Street and fell up into a bookstore that had graphic novels in the back and that's when I saw it. The illustrated adaptation of Alien written by Archie Goodwin and illustrated by Walter Simonson. So real talk, I've never really seen the movie. Just parts and thought I'm not gonna see it because (A) I couldn't being under 17 without parent or guardian and (B) I know the whole story from seeing the graphic novel. I never bought the book because I had no money so go go gadget Amazon! 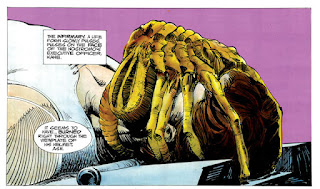 Can we just get back to what you thought about the movie CoknI? Sure. Fair enough. I liked it but I don't like spoilers so let me give you one which brings up my disappointment. All the color people die first. This wasn't what I was expecting in this Millenial era. My hope was they would actually have the movie be the success of wiping out all non-metalic organisms basically any living thing that breathes, eats or shits. The vibe I was on, was since there was a deeper view from following the career of the original Oscar winner, Alien designer H.R. Giger, we would see a little bit of an elaboration on that existentialist ideal that Giger reps in all his art. What came first, the mother or the idea of mother? I got that from the documentary on him. There is a scene in that doc where a guy got to meet him before he passed and just wept openly. I totally understand. To be around a person who gets it its divine. Speaking of, I gotta big up my bredren Divine Styler who's a sick graphic artist inspired by G. 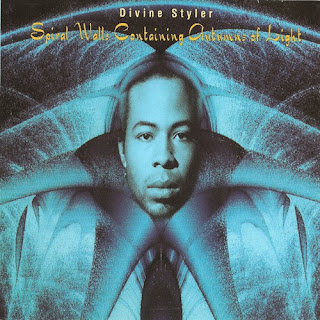 What were we talking about? Oh yes! Alien: Covenant I thought it was a Hollywood vehicle designed to draw great numbers at the box office. I'm a ticket buyer. I don't really fool with bootlegs. I'm the type of guy who watches a movie and then go buy it if it's all that. The films I buy are to my standard movies you can watch over and over and get fresh new views (pardon the pun) or enjoy the revisitation again kinda like that part in the barn in Purple Rain? I digress.

The art is about the perinatal journey and that's the source of life as we know it. The Alien story is the glorification of the perfect being either discovered, captured or created and all by human involvement. Until now or should I say then or should I say soon? Alien: Covenant is a fun flick but for me an unapologetic nerd who will fuck you up, I need more mentalness. It's got cool tech but its light on Giger and ethos. The tagline of the original entry was "In space no one can hear you scream" because there is no sound in space. So any movie with explosions or billowing sail sounds while in orbit is bogus bro. Perhaps things are implied because I guess they think people who are going to see it aren't really committed to Prometheus which is definitely not the case.
Just want to be clear. I liked the movie even though it didn't meet my expectations just like when these assholes go to other people's places and call them aliens and fuck up their land with their shit. Maybe I'm a bit triggered. Thanks for, like the implanted creature in the astronaut, letting me get all this off my chest.
It's a challenge to write in a world where 140 character expressions and memes speak volumes virally. The pathogen of apathy is rampant but stay woke nerds. Hate World. Revenge soon!
Posted by King CoknI at 5:33 PM